December was pretty bad I ended up earning $538 this is equivalent to what I was earning about three years ago, looking at a 12 month rolling average I maintain. Towards the end of the month things started to look up a little, it seems like that I reached the bottom just before Christmas, which is quite logical because December is always an off month for me. Expenses for the month were pretty much the same as normal, domain renewals have gone down over the last few months as I’ve been getting rid of a lot of domains that before I would’ve kept, domain renewals are now running at approximately 4 domains a month’s + hosting of about $15 a month.

Even though my earnings and now running where they were three years ago I don’t expect it to take three years to get back to where I was in October, taking a guess it will take somewhere between six months to a year. One thing that I do feel certain about is that I will get back to the that same point and my business will be on a much more solid foundation than it ever was before. 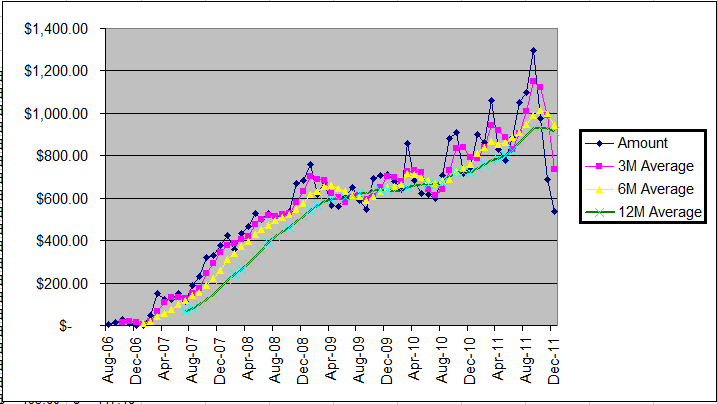 Even though it hurts financially to be knocked back 3 years I have to say that I’m quite happy about it, the reason being that I’m now working again and enjoying it, the last few years I’ve been given what can only be deemed as a pass with my earnings climbing 10 to 15% per year every year doing very little. If you had asked me three years ago what I thought about this business I would’ve said build it and forget it, this business is the best thing since sliced bread. I truly don’t believe today that this is the way to go or a model that has a sustainable future.

In December I ended up finishing one site, which was a total success in the sense that its earnings went from (X) to 2.5 x (X) a month. I think a few tweaks and another few pages could get that to 5 x (X) I also created a product related websites selling a service which I know quite a lot about, this is 75% finished. Finally in the last 10 days of the month I set up another site which is now live, it is a site that deals with Living in Thailand and what you get for less than $500 a month. Each day for 31 days during the month of January I will be adding a page about my expenses and activities that day showing how you can Live in Thailand well with less than $500 a month, plus a topic a day concerning the whole living in Thailand thing, based on my own experiences, not quite sure where it’s going to go exactly long term, what I do know is that I will have a 30 page website by the end of the month.

I’ve also started to do a lot more detailed testing during the month of December, which I’m ashamed to say I have never done before. Before experiments for me were in the mind, you do this you get that, seem to work, is making money. I’m now focusing on some very small points following them, monitoring them, and seeing what the results give. Most time the results are inconclusive but occasionally I’m seeing things, which are black-and-white which will enable me to upgrade a lot of my websites over to next year, in a logical proven way.

A couple of days back I decided to sit down with a list of domains and websites that I own and detail next to each one, very roughly what needs to be done with that website or domain to get to a point where I feel comfortable that it essentially finished and awaiting results. I have 342 days work in front of me, based on a very conservative estimate, so I have my work cut out for the next year and a very well defined roadmap.

After reading an article recommended by a friend the other day on how to write quickly, “maybe not professionally but fast” I honed in on a couple of things one was freestyle writing and the second was setting a time limit. Creating content has to be my least preferred thing and something I do not do well, In America I could afford quite easily to pay others to write for me so it was not a problem, as I look back now though I can see that’s what I was having written was not that good the business then was so easy that all you needed to do was just put it on the web and voila your making money, this method of doing business in my opinion is pretty much extinct. Sure one can still outsource content it needs to be very good though and one needs to edit it afterwards. The only other option “which I’m kind of stuck with” is to write it your self, as I need to develop my business which equals more content I’m having to learn how to write, and write quickly. After reading about freestyle writing and trying it, I decided to incorporate something that I continually go back to but never seem to stick with, using Dragons speech to text software. I have dabbled with this software for years now, buying the top of the line version before leaving It’s pretty awesome to say the least, it just has a huge learning curve if your aiming for 100% my last effort using it a few months back was better than the previous efforts, in that I learned to just talk and not look at the screen “sure it makes a few mistakes” around 20% the speed was incredible though. After giving this freestyle thing a go the other day I realized that I could do the freestyle part very easily with Dragon then just go back and edit afterwards. Initial results are promising I can talk a thousand words 3-4 times quicker than I can type.

This entry was posted in Minimum Wifi, Monthly Earnings Reports. Bookmark the permalink.